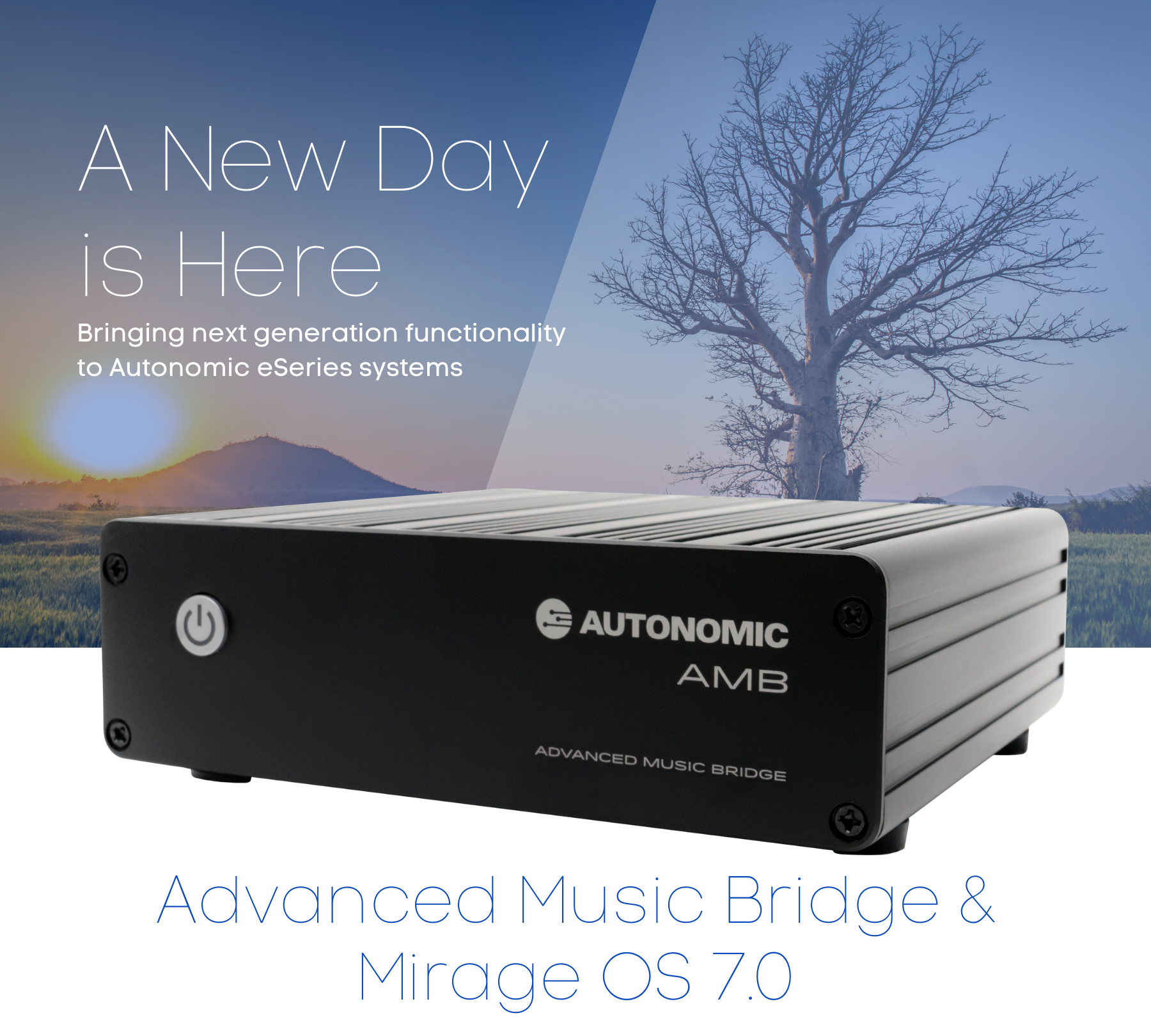 Installation is extremely simple: connect power and ethernet to the AMB, then perform a firmware update to existing Autonomic eSeries components. It is not necessary for the AMB to be physically connected with the on-site Autonomic gear as they communicate over the local network. Once this is complete, the Autonomic system will gain all the new functionality of Mirage OS 7.0.

“Many of these features were going to have to wait for our next generation hardware platform because we knew we couldn’t deliver all of them on our existing platform. Instead of delaying much sought-after functionality and requiring dealers to replace their entire system to get these features, the team came up with the idea of introducing new hardware and software capabilities via an add on device,” says Michael de Nigris, Autonomic CEO and Co-Founder. “This creative approach enhances the value and longevity of our customers’ existing investment in our products, while reducing our reliance on highly scarce audio chips. By leveraging hardware already deployed in the field, dealers will be able to provide this solution to a far greater number of projects. The final benefit is that we will be able to maintain healthy stock levels of MMS’s and Amplifiers for new installations.”

Autonomic has released updated drivers supporting the new features on major control platforms, including Control4, Crestron, Crestron Home, Elan, RTI, and URC. As with all Autonomic systems, new features will continue to be added to OS 7.0 with the Advanced Music Bridge in the future. For customers who do not need the advanced features of the AMB, Autonomic has also released OS 6.4 which includes support for the Josh.ai integration and provides hundreds of stability and performance enhancements to existing eSeries systems free of charge without the requirement of the AMB.

The solution was previewed with a group of high profile and highly collaborative dealers during a beta-test earlier this year. They all provided invaluable assistance in helping the Autonomic development team fine tune the product and experience. "It’s an amazing addition to the line and things are just going to get better this year - kudos and congratulations to the Autonomic team for hitting a home run on this!" said Richard Fergosa, President of Fergosa Design in San Leadro, CA.

Mirage OS 7.0 with the AMB Features

OS 7.0 allows customers to add multiple Apple Music accounts to any eSeries MMS and play back two simultaneous streams of Apple Music. If more streams are required, multiple AMBs can be added to the system. The integration supports browsing and playback of Apple’s curated content like “Top Charts” and “For You” as well as your own Apple Music library with pivots for Playlists, Artists, Albums, and Songs. You can also perform a text search within Apple Music. OS 7.0 also includes Apple Music content when you perform a TuneBridge™ global search.

With OS 7.0, Autonomic streamers and amplifiers are configurable as Josh.ai input sources and output zones throughout the home. This will allow customers to include music in their natural voice commands such as “Ok Josh, draw the west sheers, listen to Yo-yo Ma in the den and dining room, and set the volume to 25%”. Josh.ai also can access Autonomic streamers when routed through Crestron SIMPL, Crestron Home, and Control4 audio distribution.

Calm Radio helps you enjoy better sleep, improved focus, and reduced stress with the world's largest collection of curated classical and relaxation music. Behind each listening experience at Calm Radio is the musical and audio expertise of an individual designer curating programs around the top three activities in listeners’ lives: work, study, and sleep. Simultaneous streams are supported using one free or premium account on any eSeries MMS.

OS 7.0 and the AMB supercharges customers TuneIn Radio experience with new stations and support for TuneIn Premium. Live MLB, NFL, NHL, motorsports, college sports and nonstop news from the biggest networks, ad-free music, and access to 100,000+ radio stations are now at the fingertips of every Autonomic user. TuneIn provides radio broadcasts in clear digital quality and enables Autonomic apps and control systems to display album art and station information on a variety of interfaces.

Customers using the AMB and Mirage OS 7.0 will be able to import up 200,000 tracks to their Autonomic MMS-5e Music Streamers (up from around 40,000 tracks previously). OS 7.0 utilizes updated indexing logic and performance enhancements that allow users to browse and listen to mega-libraries while maintaining responsive interface performance.

The AMB and OS 7.0 require an eSeries Mirage Media Streamer such as the MMS-1e, MMS-3e, or MMS-5e (all streamers sold during the past 5 years). Autonomic also offers a generous trade-up program for upgrading older A-Series systems to Autonomic eSeries hardware.

The AMB with Mirage OS 7.0 is now shipping and available for purchase (dealer login required). Click here to go to the Advanced Music Bridge.